As someone who’s been creating art professionally for over 10 years, Justin Maes has honed a collection of work that is part satire, part performance. His use of humor and societal and cultural references make his work pleasing and easy to look at but also surprising in unexpected ways. He finds inspiration in the most overlooked aspects of life, whether it’s the ways in which we’re raised, behaviors, or interpersonal relationships. His observations have yielded work that is often colorful and controversial. “Humor’s always been a common thread throughout the work, even when I’m trying to deal with serious topics. I want to try to scratch the surface in a way that isn’t as abrasive,” says Maes. “It’s like a candy-coated pill: It serves its purpose, it dulls the pain or serves a function, but it’s candy-coated in a way so that you don’t taste that medicine.”

The non-confrontational nature of the work makes Maes’ art fun and edgy, but creates conversation. That conversation is indicative of how Maes wants his art to function. One of the goals of his work is to cause physical reaction or action. It’s an interesting goal considering that so much of his art involves some sort of self-portrait. That implication of the self is what takes his goal from arrogant proselytization to more of a disidentificatory subjectivity, one in which he is able to comment on issues of identity or culture while admitting his own flaws.

Maes’ identity is a recurring theme in his work, but is generally more about questioning those dominant aspects that make up his self. For instance, the ever-present image of the penis is used to challenge masculinity and machismo while confronting art viewers with a body part that is almost always considered pornographic. Because of the ridiculous placement of the cock, that organ from which all power is allegedly derived, Maes subverts the ways in which Western society places the male on a pedestal.

“I’ve always been fascinated by the male disposition, not just as far as the macho man but just everything from the Peter Pan perspective,” says Maes. “I’m kind of caught in this Peter Pan phase. I just want to stay like a young boy; I don’t want to grow up, so I’m just holding on to these playful images of youth and all this nostalgic stuff, and the attitude of my work is becoming more aggressive as I try to hold on to that.”

That aggression shows through in a couple of series he’s working on. One is a collection of portraits that are superimposed with images of office equipment and placed in office/studio spaces. Each result is a macabre image of a centaur-like being who is, for instance, half man-half desk. “The series is based upon me coming into this new studio space and then rather than imposing my artwork and my identity on the space, I wanted to introduce myself to the building or the environment in a philosophical attempt to establish a more conducive relationship with the space that would be more prone to creativity,” says Maes. “So, instead of coming in and being like, ‘Hey, fuck you, room. This is my room. This room is me, here’s my identity,’ it’s like this room’s probably like, ‘Hey, man, screw you. I got history. I’ve been here far longer than you have.’ So, I was very interested in connecting with space, just very directly like you would approach a person.” The portraits are absent of the usual bright colors and clean lines. Instead, the color is drastically muted with a cloudy black, and the figures are silhouetted and difficult to make out.

The sketchy element is also present in Maes’ other series, which he is tentatively calling “Jacks.” The series’ images are pulled from classic depictions of nursery rhyme characters named Jack. “I was looking at this old book of nursery rhymes that I had and I was noticing, just coincidentally, not even looking for a pattern, that a lot of the male characters within the nursery rhymes have the name ‘Jack,’ ” says Maes. This kind of observation has driven many of Maes’ series, but the inspiration is much more literal since the Jack images are appropriated.

The reinterpretation of the Jack images works well with how Maes has been interpreting the nursery rhymes, as he is focusing on the tragic nature of the Jacks and how they may still be applied to the contemporary male disposition. Like “Jack Be Nimble”: “There are so many metaphors that can be applied today, like you have to be fast, you have to keep moving, and the candlestick could be society or a goal, anything that’s fleeting that you have to capture,” says Maes. “With my attempt to try to hold on to youth, it seems like the candle is something that is very fleeting, just like we are and youth is.” 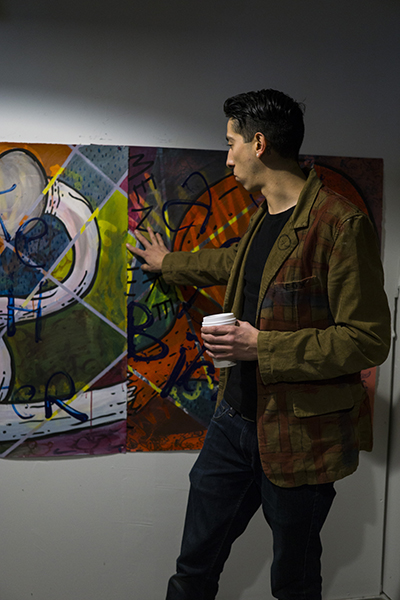 The Jack series continues the seemingly youthful imagery that Maes has been working with for the past 14 years, but he’s deconstructing the figure outlines and making them float in dark spaces. “I’ve been working with these images that have been fairly abstracted. They’re not like, ‘Here’s Jack Horner in a corner,’ per se, but there are multiple layers, and I think when you start seeing all the stuff together, it’ll tell a weird story of tragic youth,” says Maes. “When I think about my friends and I, some of the stuff we got into, some of the things we did, some of it was really kind of tragic in a way, or was awesome and fun but maybe we got into trouble and we could’ve made better decisions.” The nursery rhymes are meant to teach little boys how to behave and perform in society, but Maes is approaching them from the perspective of a grown male who’s already made mistakes but uses those experiences to learn from and/or take inspiration for creative endeavors.

One such endeavor he’s been increasingly interested in is music. “I do music as a side thing, so I’ve been working on that. Whenever I’m working on a musical project, visual will take the backburner a little bit, but I try to balance both out,” says Maes. “I’d like to culminate the music and the work I’ve been doing in one event that would somehow tie together. Like, if you heard the music, it would sound like the paintings look, and vice versa. Together they might create some sort of full circle story.”

The aforementioned event will take place in May, when Maes is having his first solo exhibition in a few years. The show will be in the ABC Custom Framing downstairs gallery, and it's opening will hopefully function as a CD release party as well.

In the meantime, he’s collaborating with his partner, Pesha Forest. “Pesha and I living together has been an inspiration; trying to find that balance of living with another person and working with that person, and trying to be a team rather than constantly combatting,” says Maes. “As we’re getting older and learning to live with each other, I think that rather than ignoring issues, they’ve really become a focus, not just in our relationship, but also in the work that we’ve been making.”

Two of their videos are “The Showdown” and “Shoot ’Em Up.” They are silly and cliché, but reflect moments in the relationship where the decision needs to be made to either “shoot it out” or work on the partnership, and the moment when one partner needs to bring the other into a state of maturity. In this case, it’s Maes being forced out of his Peter Pan phase as his work and self are maturing.