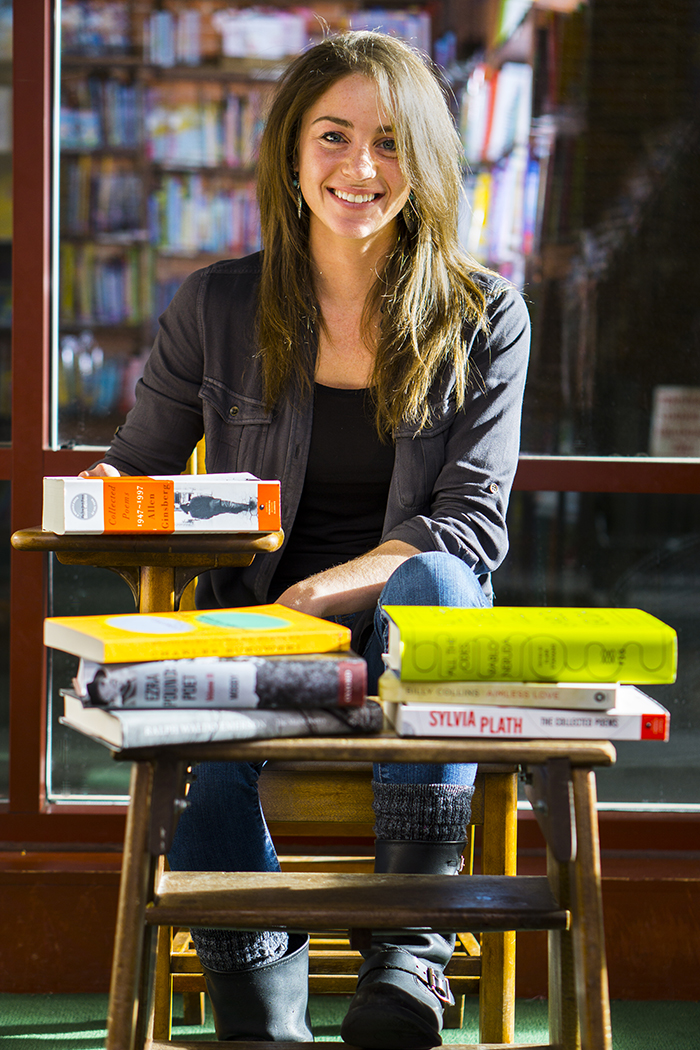 Calm, composed and brilliant, Kristin Macintyre is the perfect example of an aspiring writer. She appreciates the power of the written word, and understands well how it can help a person learn who they really are.

Looking back, Macintyre believes she must have been meant for writing from the start. For as long as she can remember, she has had a love for the written word that endured and even helped her through harder parts of her life.

“I must have been a writer out of the womb,” says Macintyre. “It always made sense for me to express myself, my emotions, in words, through a combination of words.”

That passion began to gain a structure and focus later on in her life, as well as give her a way to learn more about herself. One moment in particular introduced her to writing in the genre she would favor most, poetry.

“I wrote my first poem in sixth grade,” says Macintyre. “It was an assignment for a language arts class and it was to describe yourself. So it was kind of an internal reflection of who you are. I just loved the idea of describing me: in color terms, I used animal terms, and I included in there what I am not. It was easiest for me to explain what I wasn’t more so than what I was, but I liked the practice of describing who I am on the inside through words.”

Moving forward, Macintyre ran into hardships and obstacles that kept her from writing as much as she would have liked. Nonetheless, she still found other avenues that helped her grow as a writer. Specifically, she was drawn to the more personal genre of journal keeping.

“Middle school and high school, I mainly loved to write in a journal,” says Macintyre. “I kind of grew into writing through stream of consciousness journal entries, just about life growing up and relationships with people and emotions. I didn’t know to form any of that into a craft yet. I was just kind of exploring who I was in journal form for a couple years, which was interesting.” 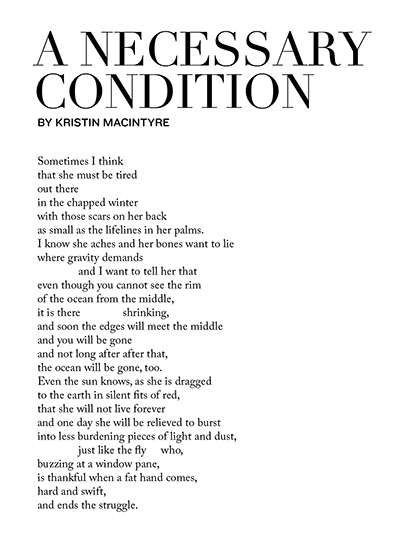 Upon reaching college however, the world of writing was opened up to her. Her classes and the professors who taught them revealed world of writing and helped her to see just how far its boundaries could stretch.

“College definitely opened my eyes to poetry as a genre. Creative nonfiction is a genre that I love -, fiction stories, screenwriting,” says Macintyre. “Things like that gave me a set of rules and guidelines about writing as a craft.”

Macintyre notes that an academic environment and instructors helped her to maintain her passion and keep writing. At some of the toughest points in her life, it was their pushing her to be the best writer she could be, as well as their own inspirational love for their craft, that kept her in the world of writing.

“I always cherished reading and writing, but I experienced many highs and lows throughout the years,” says Macintyre. “I wrote the least when I was in my late-teens - when I was distracted with a fistful of difficult experiences - and the most now. I think my academic career has a lot to do with my production of writings. All of my English professors are great inspirers and challenge me to write in new and exciting ways.”

Of the many genres she has learned about, poetry has stood out as her favorite, “Poetry was always my niche, that I responded to, that I wrote,” says Macintyre. This love was boosted by an admiration for the works of poets, past and present.

“I first developed a love of poetry through ancient poets like Rumi, Kahlil Gibran, but I also like modern stuff too,” says Macintyre. “I recently discovered a poet, and her name is Tracy K. Smith. She lives in Brooklyn; she is really wonderful. I’ve also experimented with some formed poetry that I was introduced to by A.E. Her name is A.E. Stahlings.”

She finds it difficult to choose a favorite poet, however, discovering something memorable in almost everything she reads. For Macintyre, choosing an absolute favorite poem would be like “asking a mother to pick her favorite child.” 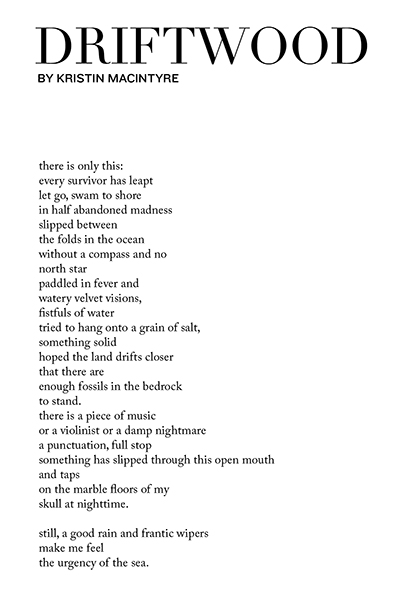 “I will say that recently I’ve been changed by Tracy K. Smith’s poetry collection, ‘Life on Mars,’ and Max Regan’s pamphlet of poetry, ‘Faithless.’ Both poets have the ability to sweep me off my feet. Their poetry is, quite simply, stunning.”

She also notes how both poets’ works resonate with what she loves about poetry: themes of longing and fleeting moments that stoke the flames of imagination. Poets like Smith and Regan, make her endless list of beloved poets by doing just that.

“As a poet, I have always been captivated by the poem’s ability to reinvent how we see the world in just a few words,” says Macintyre. “Both Smith and Regan continually color my perspective.”

“There are so many ‘subgenres’ housed under the CNF umbrella that pique my interest, but I suppose the subgenre that most intrigues me is memoir,” she says. “I’ve had a colorful past, as have we all, and recounting some of these events, retelling them from the memory microscope, is really an amazing process.”

At the core of this affair with literature, Macintyre believes that what truly drives her to write is the effect writing has on her and what it allows her to do.

“Writing lets me reach behind what I think I know, or what I have learned to name,” says Macintyre. “Poetry, in particular, teaches me over and over again to look at the world with wide eyes. Even though we live in the post-millennia world, there is still a bit of magic out there... and things that make our lives meaningful in ways that we can only hope to put into words. I am captivated by that little shiver that invades the poetry process, when I can tell myself I was, for a moment, closer to something or someone than I have ever been before.”

In the future, Macintyre hopes to pursue a career that can harness her love of writing.

“My dream beyond anything is to be a published writer, but I also like academia and I love a student-teacher environment,” says Macintyre. “I would really, truly feel blessed if I could teach creative writing to higher education students at a college level. Just to constantly perpetuate that learning, teaching, apprenticeship deal.”

For some parting encouragement to other budding writers, Macintyre has two pieces of advice. The first is to follow your gut instinct.

“There’s a connection with writing and it doesn’t happen all the time, but when it happens, it’s gold,” says Macintyre. “So stick with it. If you know what you’re up to, keep at it.”